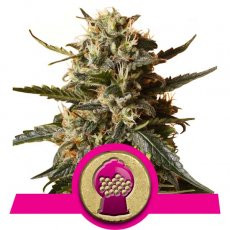 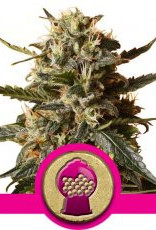 Bubblegum XL stems from the world-famous original strain of the same name. The Bubblegum variety first emerged in Indiana, yet subsequent phenotypes were later perfected, both in New England and the Netherlands — the cannabis capital of Europe. The Dutch phenotype — developed by TH Seeds — entered circulation and put Bubblegum on the radar of cannabis users all over the world.  This sweet and aromatic strain went on to garner quite the reputation, winning awards at the High Times Cannabis Cup and the Spannabis Cannabis Champion’s Cup in 2005.

Bubblegum features a perfectly balanced genetic profile of 50% sativa and 50% indica. Her mellow high — fuelled by modest THC levels of 13% — soothes the body while stimulating the mind.

A broad and sweet Strain

This plant can easily yield 500 grams per square meter when grown indoors, not the largest yield but the quality makes it worth it. Outdoors, it all depends on the climate; dense hybride cannabis strains like this can grow in most countries in the right season. However extra attention must be paid to avoid problems with mould and rot in wetter climates. She will not grow too tall and doesn’t even stretch up too much like some Dutch strains do – staying small and manageable.

Bubblegum XL has a sweeter aroma than many other Amsterdam strains, with a sweet earthy flavour. Flowering takes around 8 to 9 weeks, producing dense, resin covered buds.

Add your review
0 stars based on 0 reviews
zaden /