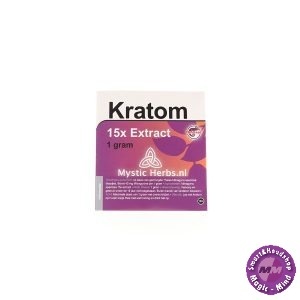 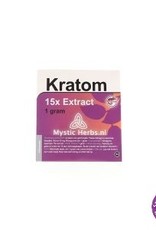 Kratom is an herb made from the leaves of a Thai tree. In Thailand it has been in use for a long time because of its medicinal effect. For several years now, it has been popular in the West, mainly for its narcotic effects. Kratom has a strong effect on your mood and energy. It gives a feeling of happiness and strength and encourages activity. At a low dose it is euphoric and stimulating, at a higher dose it has a calming effect.

The medicinal effect of the leaves was first described around 1835 by the Dutchman Pieter Korthals. In 1943 the tree was banned in its country of origin. Today it is grown in several countries outside of Thailand. Due to different processing and mixing of leaves, the effects may differ. Kratom 15X Extract from Mystic Herbs is of very good quality.

More than 25 different alkaloid are found in kratom leaves, of which mitragynine is believed to be the most important. Mitragynine is related to substances in psychedelic drugs. But Kratom does not have a psychedelic effect. It has the narcotic effect of opium and, like other opiates, arouses sexual desire. Most users report improving mood, disappearance of anxiety and a feeling of general relaxation. High doses can induce prolonged sleep.