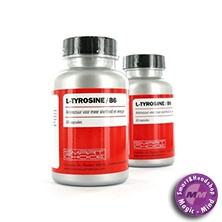 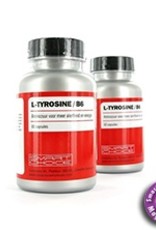 L-tyrosine is an amino acid that is a precursor to stimulating neurotransmitters such as norepinephrine and dopamine. It is often used to recover from drugs such as cocaine and amphetamines.

It can also be used to recover from serotonergic drugs such as MDMA, but in that case the user must first restore his or her serotonin levels by taking l-tryptophan. Taking l-tyrosine while there is still a lack of serotonin can have neurotoxic consequences.

Take 1 capsule per day on an empty stomach with some fruit juice (sugars support the transport through the blood-brain barrier). To recover from cocaine or amphetamines, take one capsule before going to bed and another after waking up. To recover from MDMA, take a capsule of l-tryptophan before going to sleep and take a combination of l-tryptophan and l-tyrosine the next morning.

Do not use in combination with MAO inhibitors. Not suitable for people who have been or will be treated for malignant melanoma. Do not use during pregnancy or lactation.