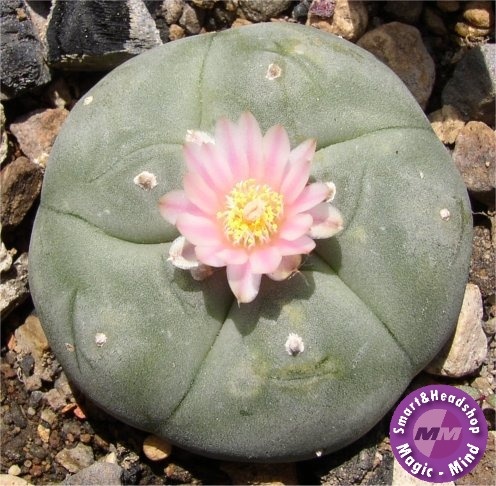 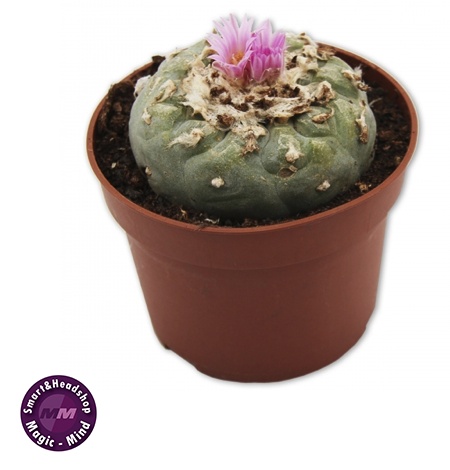 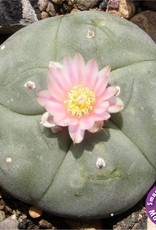 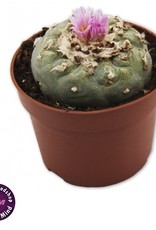 Peyote is a small cactus (2 to 12 cm in diameter and about 5 in height) without spines. The bulbous cactus has a striking appearance with a body that is divided into 5 to 13 button-shaped segments. The cactus produces flowers sporadically; these are followed by small edible pink fruits. The club-shaped to elongated, fleshy fruits are bare and more or less pink. At maturity they are brownish white and dry. The fruits do not open on their own and are between 1.5 and 2 cm long. They contain black, pear-shaped seeds that are 1 to 1.5 mm long and 1 mm wide. The seeds need hot and humid conditions to germinate.

Peyote contains a large spectrum of phenethylamine alkaloids. The main one is mescaline. The mescaline content in peyote cacti is about 0.4% in fresh cacti, and 3-6% when dried. Peyote generally grows extremely slowly. Cultivated specimens grow significantly faster. Faster growth can be achieved, among other things, by grafting peyote onto mature San Pedro roots.

Mescaline (3,4,5-trimethoxyphenethylamine) is a serotonergic psychedelic (much like psilocybin and LSD), meaning it exerts its effects by affecting the serotonin 5-HT2A receptors in our body. In addition to mescaline, Peyote also contains hordenine, an alkaloid that acts as a so-called MAO inhibitor. This compound prevents the body from absorbing mescaline too quickly. Without this compound, the effects of mescaline would be less noticeable.

The History of Mescaline Cacti

The use of mescaline cacti  dates back many thousands of years. In fact, Mescaline is said to be one of the oldest psychedelics used by humans. Peyote, for example, has been used by Native Americans in Mexico for at least 5,700 years.

In 2005, researchers used radiocarbon dating and alkaloid analysis to study two specimens of peyote buds found in archaeological excavations of a site called Shumla Cave No. 5 on the Rio Grande in Texas. It turned out that the samples came from between 3780 and 3660 BC. Alkaloid extraction yielded approximately 2% of the alkaloids including mescaline in both samples. This indicates that native North Americans have probably been using peyote since at least five and a half thousand years ago.

Europeans noticed the use of this special cactus in religious ceremonies from early contact with the Indians, especially by the Huichols in Mexico. Other mescaline-containing cacti such as the San Pedro have a long history of use in South America, from Peru to Ecuador. Mescaline was first isolated and identified in 1897 by German chemist Arthur Heffter and first synthesized in 1918 by Ernst Späth. Eight years later, a comprehensive study of the effects of mescaline was published in "Der Meskalunraush," meaning "The Mescaline High."

In 1953, Aldous Huxley took part in an experiment in which he took 400 mg of mescaline under the supervision of psychiatrist Humphry Osmond. He recounted his experiences in the 1954 book The Doors of Perception, which eventually became one of the most referenced pieces of literature in the psychedelic community. Fun fact: The rock band The Doors takes its name from the title of the book.

Drinking tea made from peyote is one of the oldest known examples of psychedelic drug use. In most cases, the root-top is cut off and then dried. These heads are then dried to make disc-shaped buds. These buds are usually chewed or soaked in water to produce an intoxicating tea. Peyote can be consumed raw or dried, but it is extremely bitter.

Another, increasingly popular, way to consume peyote is to grind the cactus into powder and process it into soluble capsules.

Effects and side effects of mescaline

Using peyote has several effects. Users report more negative effects, especially at higher doses. Mescaline can cause a variety of physical, cognitive, and visual effects. Visual hallucinations can range from enhanced colors and clarity to geometric shapes and complex fractals. Peyote is also used for various medicinal reasons. However, due to its limited nature, relatively few studies have been conducted on the healing properties of peyote cacti.

While the effects of mescaline may vary from person to person, peyote is capable of providing the user with a highly psychedelic journey. The condition caused by mescaline is generally described as brighter than the effects of LSD. Most people who consume peyote describe the experience as something positive. However, it is often the visual hallucinations that most people look for most.

Nausea and vomiting associated with consuming the cactus itself is considered an important part of the experience. It is considered to have a cleansing effect on the mind and body. Mescaline also acts as a stimulant, making users feel more energetic and eager to exercise.

It takes about 40 minutes to experience the primary effects of mescaline. These then last about 8 to 12 hours.

The side effects and effects of mescaline can be found below:

The main substances in the peyote cactus are: